Enema of the Cake: a Blink-182 Baking Tutorial

Call me a poser, but I discovered Blink-182 when I saw their episode of MTV’s Making the Video for “All the Small Things.” Being an underdeveloped queer kid that was just entering middle school, my taste in music was handed to me by television—so of course, I would be obsessed with the early 2000s pop phenomenons. I had posters of Britney, Christina and the Backstreet Boys on my bedroom walls.

Then I saw Blink making fun of all my favs right in front of me, layered over a catchy song. It was a subject I had no experience in and couldn’t relate to, but I loved it. It was likely my first exposure to any type of punk music, and my world was turned upside down. It instantly became so uncool to like corny pop stars. Down came my posters and up went up Blink memorabilia; pop punk took over my headphones, and I road into puberty like a soldier.

To celebrate the 20th anniversary of the coming-of-age handbook Enema of the State, I thought I would bake a cake! (An Enema of the Cake?) It’s going to be a simple vanilla cake because A) I’ve never baked before and B) there’s nothing more vanilla than a group of white guys complaining about growing up in the suburbs. This will be a how-to for anyone that skipped Home Ec, or for those who really has no applicable skills in life. 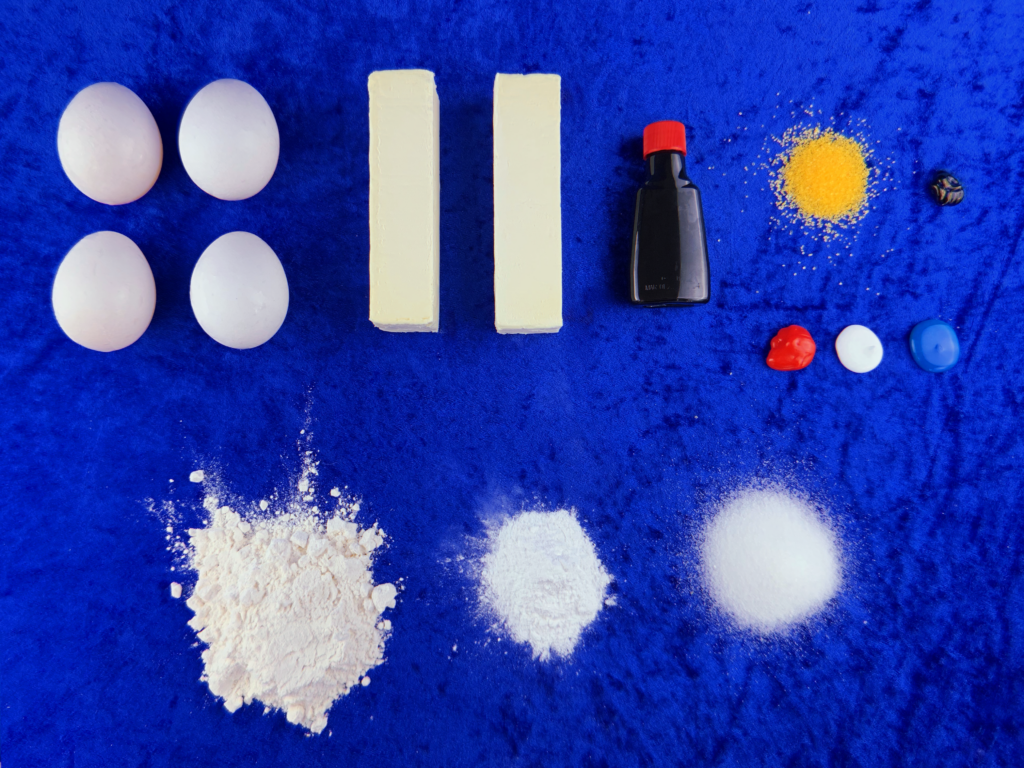 Here are the ingredients you will need:

(Before we start, I want to point out how expensive baking is—I was expecting to maybe spend 10 or 15 bucks for basic supplies. My total was like, 40 dollars? So actually, maybe skip everything I say and just buy something already made.)

Let’s put on our trusty probing gloves. You never know with cooking what kind of crevices you’ll get your hands in. You know? It’s nice to keep everyone safe from finger cuts. 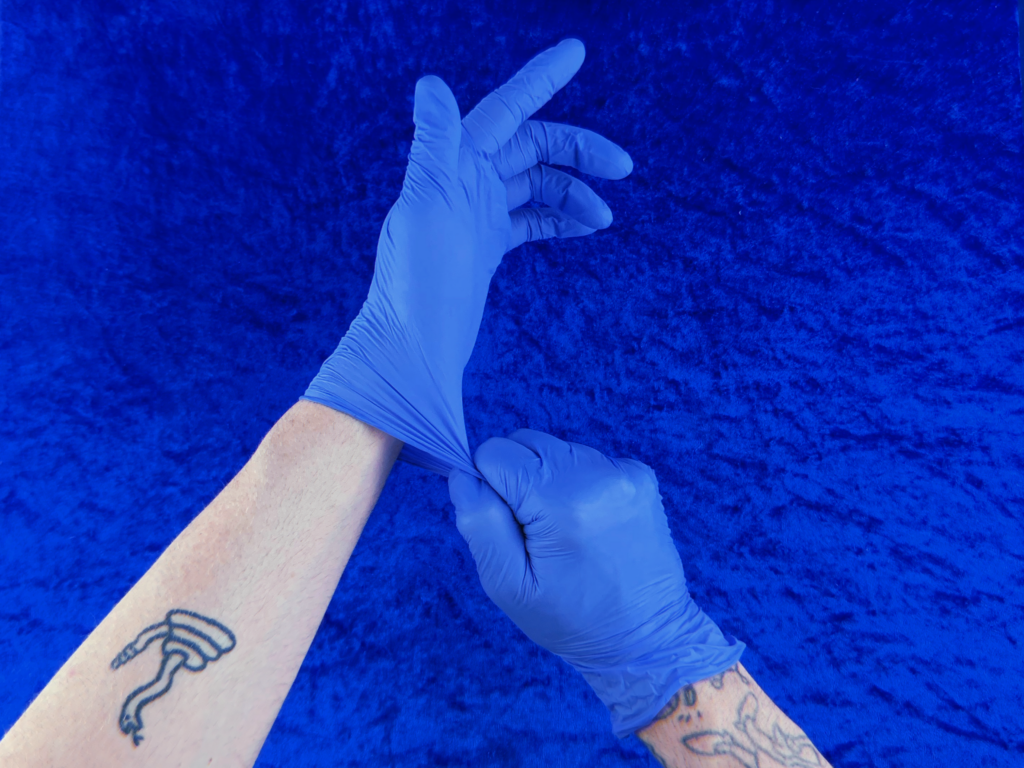 Just realized I forgot parchment paper, but I’m sure it’s not really necessary. You’re going to want to take your butter stick and smear it all over your pans. Lube up! 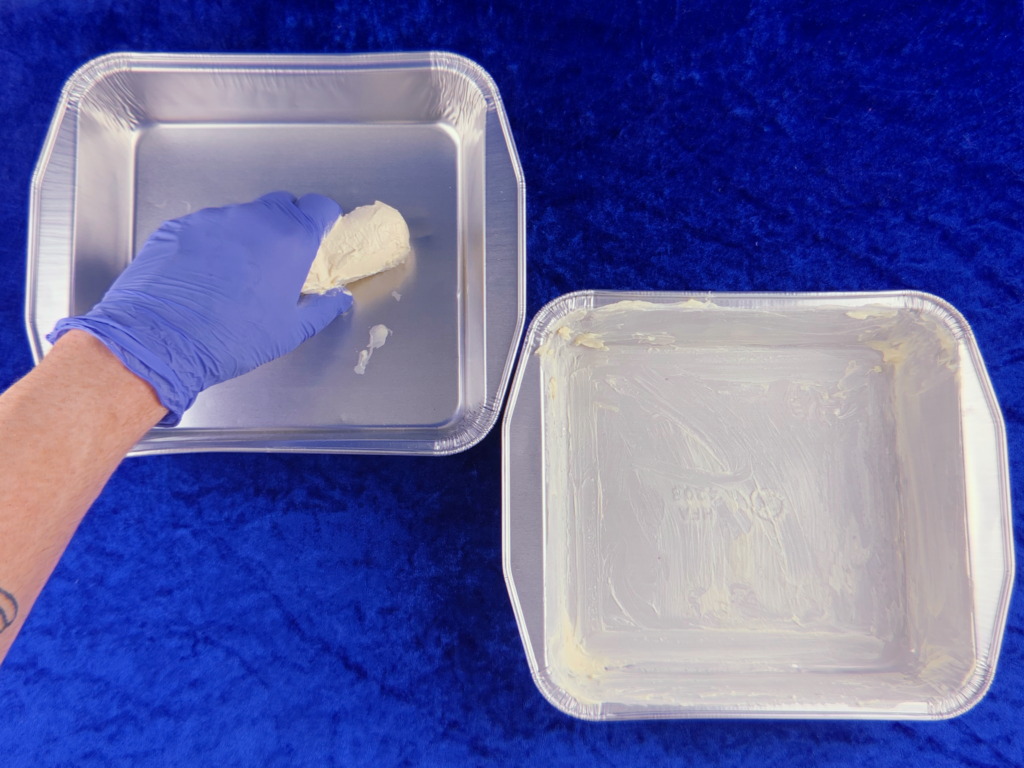 Like most of you, I didn’t mature past 23 and I never had to buy real baking utensils. My kitchen is a vacant room with bagged snacks, so I wasn’t really prepared for any of this. You will want to mix in the butter with the sugar, I think. This is where the gloves come in handy, because you’re just going to mash it around until it is fluffy. Put the eggs in one at a time until it’s more fluffy. Baking kind of stinks. 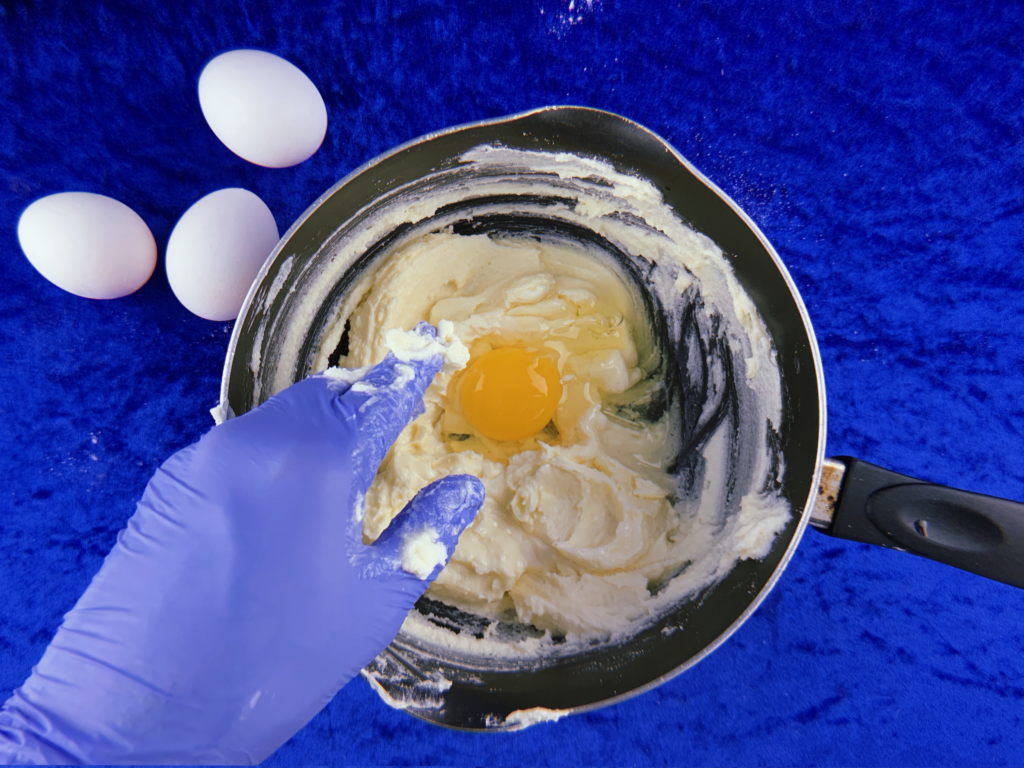 So, I forgot a step where you put the flour, salt, and baking powder in a separate bowl. So, do that and mix it well together. You’re going to keep mixing the eggs into the sugar until it looks like coughed up flem. You can add the vanilla now—it looks like brown diarrhea, so it compliments this enema cake very well. 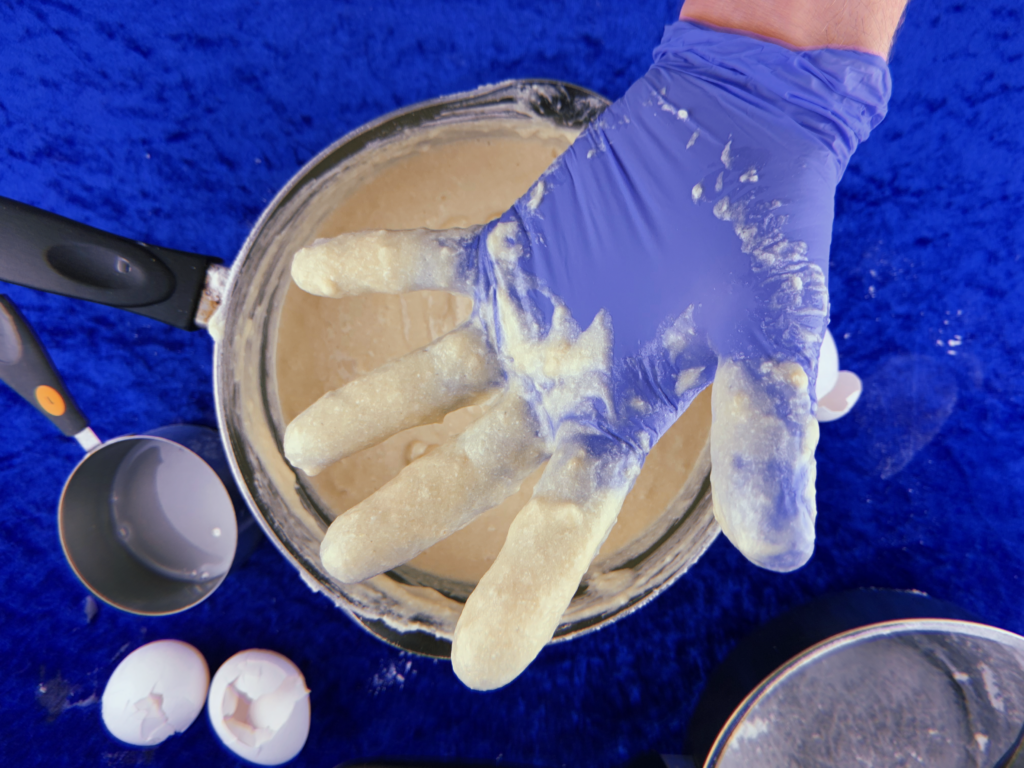 Mix all your ingredients together now. Start by pouring 1/3 of the flour mixture then 1/3 of your milk. Keep going back and forth while mixing. If successful, your cake should look like a semen sample. Pour into your buttered pans. (Please don’t fuck this up.)

Luckily, like television, you only see what I show you—not the sprinkle mess and batter all over my apartment. If you put your pans into the oven set at 350 degrees for around 30 minutes, it should look like, well… a cake. 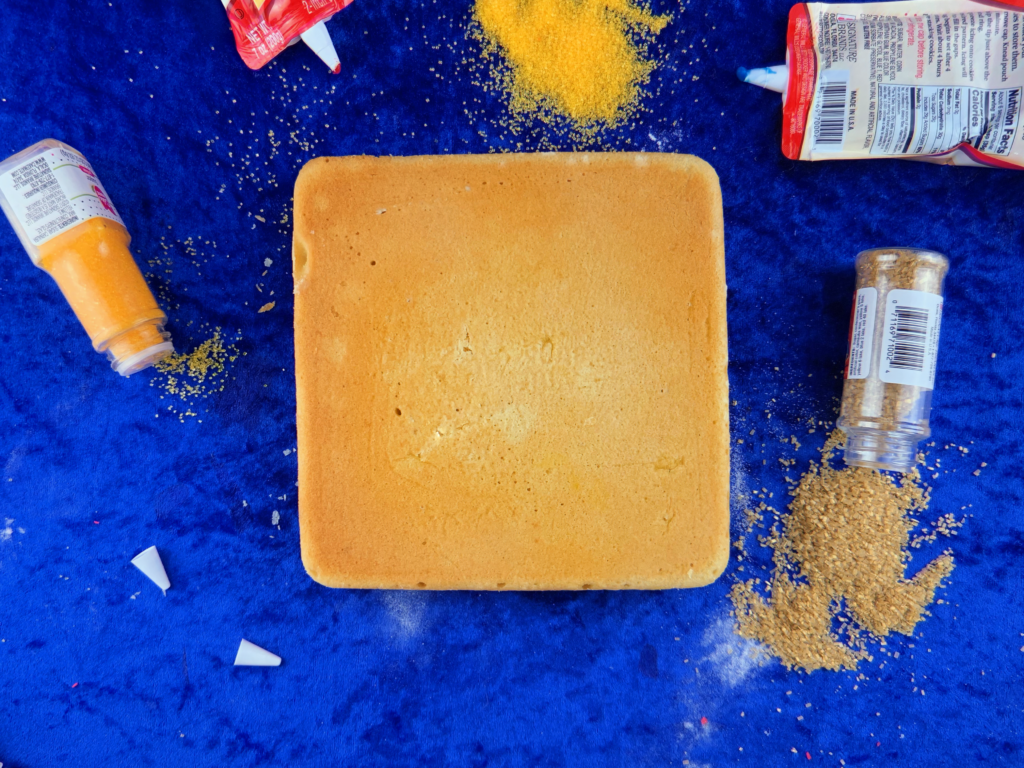 Now you’re ready to decorate! I’ve realized that I accidentally got the cookie icing. I’m sure it’s going to work the same. Start with her clothes and lips. (Okay, it’s running everywhere. This isn’t like cake icing at all.) Pour in yellow sprinkles for her hair and cinnamon sprinkles for her… flesh. Finish it by outlining it with a black icing. 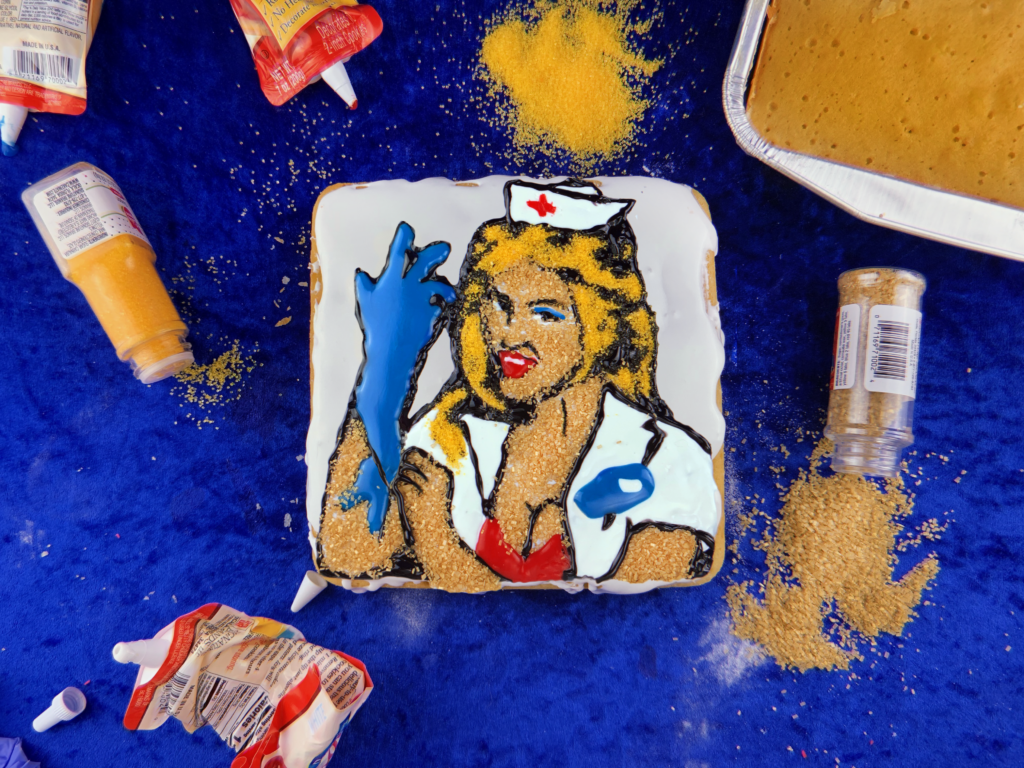 There we go! Hopefully you followed along to my very detailed and well-articulated directions, and are celebrating like a true Blink fan—you know, one that discovered them at the height of their popularity.

Blink-182 will be performing Enema of the State from start to finish at this year’s Riot Fest. Read our full write-up on the 14 full album performances for 2019.