A Cautionary Tale: The Day My Kid Went Punk

What do you do when your bright, loveable, talented kid turns into a punker overnight? Find out in the 1987 ABC Afterschool Special ‘The Day My Kid Went Punk’. 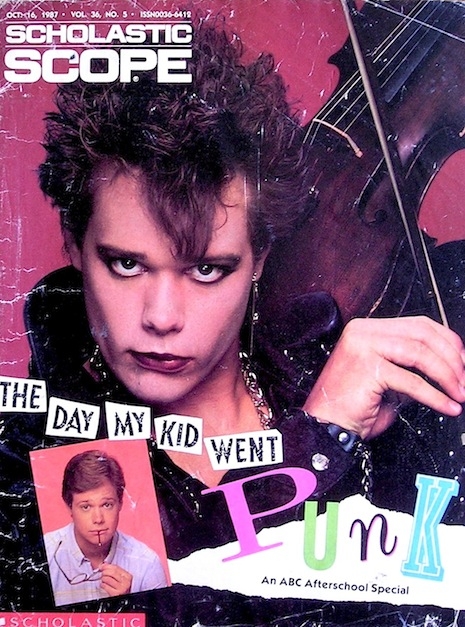 Terry Warner, is a nerdy kid who plays the violin in the high school orchestra, but when a girl he likes ignores his advances to date a punk rock dude, he decides to be a “punker” too.

So just like every kid from the suburbs who decides to become punk rock, he gets a pink mohawk, pierces his ear, wears makeup, buys a leather jacket, and joins a shitty punk band.

An American tragedy as old as time, ‘The Day My Kid Went Punk,’ tells the story of every parents worst nightmare.

Watch the doctor from the Love Boat (Bernie Kopell) become outraged as his teenager falls victim to “punk syndrome.”

Spoiler alert: by the end of the movie, Terry gets kicked out of the band because of his new look, but the girl he hit on at the beginning of the movie totally likes him now, and isn’t that what being a punker is all about?

The moral of this story is: If someone doesn’t like you, change everything about yourself until they do. This is a serious story and a warning to parents. Do you know where you child is right now?! He could be listening to punk! Don’t let this happen to your child. Punk Syndrome is not a joke!